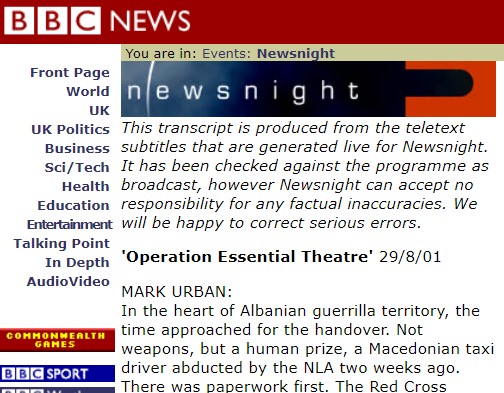 This transcript is produced from the teletext subtitles that are generated live for Newsnight. It has been checked against the programme as broadcast, however Newsnight can accept no responsibility for any factual inaccuracies. We will be happy to correct serious errors.

MARK URBAN:
In the heart of Albanian guerrilla territory, the time approached for the handover. Not weapons, but a human prize, a Macedonian taxi driver abducted by the NLA two weeks ago. There was paperwork first. The Red Cross signed for their man and then, as Tihomir Mirceski realised he was free, joy. In his relief, he was soon thanking his captors and asking for his taxi back. The Red Cross felt it wiser to whisk Tihomir away without it. The handover was a small victory for the internationals, but a victory nevertheless. This village, Shipkovo, is now choked by the comings and goings of NATO, aid workers and NLA fighters. It is the guerrilla headquarters, and the movement is now transforming itself. Seven weeks ago, Ali Ahmeti, the movement’s leader, gave Newsnight his first ever TV interview. Now he says he is going along with NATO because his fighters have achieved their war aims.

ALI AHMETI:
TRANSLATION:
There is no reason for us to keep weapons. The people will feel safe. On the basis of the political agreement, Albanians will be included in all state structures, in proportion to their numbers. Albanian police will be part of that and they will guarantee our safety.

URBAN:
A mile or two up the valley, in Brodec, NLA fighters queued up yesterday to hand in their weapons. The first phase of this process, involving one third of the hardware on NATO’s list, is now ending. Then it will be up to the Macedonian parliament to deliver their side of the bargain and pass new laws guaranteeing Albanian rights. However, even Macedonian supporters of this wonder whether the NLA, having seen violence pay, are bound to resort to it again.

RADMILA SEKERINSKA:
The main fear is that even if we go forward with the framework agreement and with the constitutional changes, that someone will appear in the mountains in six months and say, “OK, now we have a new list of demands.” And this will be a perpetual problem and cycle of violence. It will very to vote on the framework agreement. It will be very difficult to change perception, by I think is essential.

URBAN:
We’re just following that black car to another village. There are two Macedonian villages very close to it, and the Albanians say they’re coming under fire every night, despite the political agreements made by the leaders. This is the type of tit-for-tat that could wreck this whole agreement. Almost every night recently, say the Albanians, they’ve come under heavy weapons fire from their Macedonian neighbours. The mosque has been hit and so has Zaidi Demiri’s farm. What do you think of the Macedonians who used to live in this village, because you think some of them have been shooting in recent days, don’t you?

ZAIDI DEMIRI:
TRANSLATION:
Though who are shooting they’ll know if they belong here. They’ve burnt houses, children and animals. But those who have clean hands, they’ll be free to return.

URBAN:
The suffering is not one-sided. Some Macedonian families who lived on the edge of the village appear to have been burnt out. The NLA is in the village and has fought here in the past, although now its commander wears civvies and chose anonymity as he showed me where the recent firing has come from. NATO, he feels, should now enforce this frequently broken cease-fire. Why do you think they’ve been shooting here these recent nights, when their government has signed a cease-fire agreement and some kind of peace agreement?

NLA COMMANDER:
Yes, that’s the problem, because we are treating that the peace agreement is signed and also the actual the cease-fire, but actually they don’t respect no cease-fire nor the peace agreement. So we can conclude that they don’t want peace, they are against the NATO troops who came here and they are trying to make more damage to the civilian people.

URBAN:
Across a deserted railway line, a couple of miles away, in a Macedonia village, the explanations of recent cease-fire violations have the same ring to them.

FILIP PETROVSKI:
The railway is over there 150m, and there are they’re out positions. Behind that you’re not safe, because behind that you have Albanian terrorists.

URBAN:
Obviously the Albanians are saying that you shoot in the night.

URBAN:
But you’re saying we’re unsafe from them. It’s difficult for NATO to work out.

PETROVSKI:
Who claims the territories? Macedonians or Albanians. Albanians cleansed all these villages. This is a Macedonian village. We have to defend this village. Filip Petrovski is not run-of-the-mill policemen. They’re heavily armed, of course. But they’re also both members of the Macedonian parliament.

PETROVSKI:
The situation is very bad for Macedonia for six months now and we, as members of Parliament, we’ve spoken lots of times about it. At the end we’ve decided there is enough talking.

URBAN:
Filip have joined a special police reserve unit. The Albanians say these men are paramilitaries, loyal to the prime minister and his tough brand of nationalism. Foreign diplomats, too, are worried about how this force could be used. The MPs’ opposition to the agreements with the Albanians is quite unequivocal.

URBAN:
There is a muscular nationalist backlash in Macedonia. It threatens to drive through the peace agreements, which might leave NATO caught between the two sides with its job only half done. This summer’s hit song here has been “Kriva e ONA” “The NLA’s guilty”. But the song’s lyrics also attack the Western nations that have pressured Macedonia to accept the peace deal. This anger may also have been a factor in the killing of a British soldier by Macedonian youths. It leaves those in favour of the deal feeling nothing can be taken for granted.

SEKERINSKA:
Largely, the success of the parliamentarian procedure will depend on the situation on the ground. If, basically, opinion in the public is that the situation is getting more and more stable, if the militarising procedure and the disarmament goes on relatively well, and I think this is the third and crucial factor, if the displaced persons are able to return to their homes, I think that the atmosphere in the public will be positive towards the framework work agreement.

URBAN:
At this makeshift refugee hostel in Skopje we caught some anti-Western feeling from the caretaker, abuse, but thankfully not violence. There are about 35,000 Macedonian refugees and perhaps 50,000 or 60,000 from the Albanian community. Biljana’s wedding video is a record of another shattered Balkan community. It’s one of the few possessions she has in the tiny room shared with her in-laws. They fled their home when the NLA took over their village. The Albanian guerrillas say that refugees are welcome to go home. So these Macedonian refugees agreed to go back with us. There’s little left in the house. The family took away many valuables when they fled, and looters have picked the rest clean. But what is a Macedonian family to make of this?

BILJANA:
The graffiti reads UCK (pronounced uu-ch-ka). They call our name for the Albanian terrorists, the first terrorist group from Kosovo, UCK.

URBAN:
By painting that in here, is that the message to you?

URBAN:
Is it a warning, do you think, not to come back?

BILJANA:
Well, what do you think? I think yes.

URBAN:
The grim dynamic of ethnic partition has worked its way here. Albanians forced out their Slav neighbours, the Macedonians shelled the Albanians in reply, and now the two communities are bitterly estranged. None of it bodes well for the Macedonian political debate or what will happen once NATO goes. Back at NLA HQ in the mountains, the leadership has bought the peace package, even if its foot soldiers undermine it by some of their actions. The NLA is shifting its agenda and trying to exploit the instability of the current situation to get NATO to stay for longer than its declared 30-day mission.

AHMETI:
TRANSLATION:
We would like NATO troops to stay longer in Macedonia. But this does not depend on us, it depends on NATO’s ruling council. In the agreements between NATO and the NLA, we expect a considerable number of international observers from the OSCE and other organisations which will help the process and stabilise the situation, preventing damaging incidents.

URBAN:
These Dutch paratroops were deployed to secure the Brodec handover point. The mission of collecting weapons, it is now clear, is fraught with political danger. The Macedonians are loath for them to stay and the Albanians will curse them if they leave. The NATO troops and the infrastructure work political agreement are more than just symbolism. But the Western alliance have set a strict timetable for this mission and when these troops leave, the Albanians and the Macedonians will be facing each other once again. Everything that one can learn about hatred at the community level, suggests violence could start up again. If the past few months have taught the world anything, it is that only being heavily engaged here prevents a slide to full-scale war. But any expansion of NATO’s mission involves being sucked deeper into the quagmire.

2001јегуновцебибисивојнаизјаватетово
By adminAugust 29, 2001ИсторијаLeave a Comment on ‘Operation Essential Theatre’ 29/8/01